A Monk, Two Trees and a PG&E Crew, in the Wake of a California Wildfire

Summary: In the midst of California's most challenging wildfire season that has burned over 4 million acres as of October 4, 2020, volunteers from a Buddhist monastery begin clean-up efforts at a mountainside hermitage. Buddhist monk Jin Wei recounts a stirring moment of connection, where monks, power company contractors, trees and all the other living beings created and experienced a sacred space and moment in the Santa Cruz mountains. 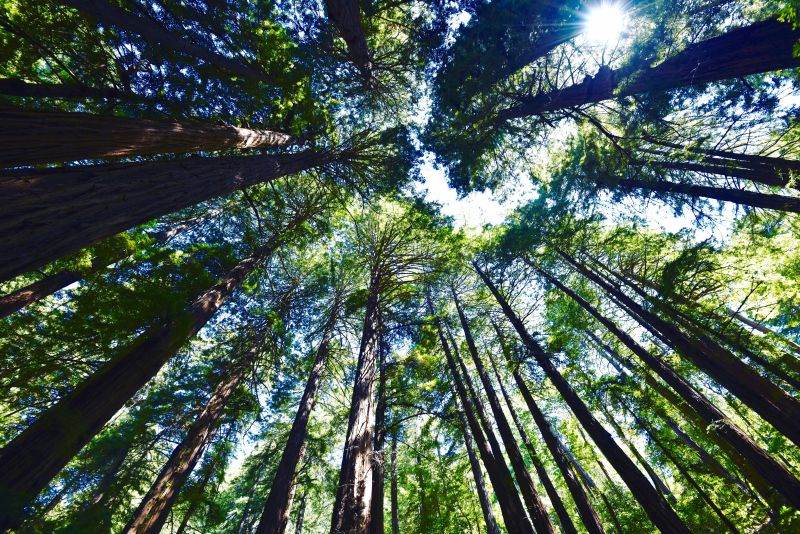 What's a time when you experienced the whole as greater than the sum of its parts?

I am sitting here in the courtyard of Redwood Vihara, in a redwood forest in the Santa Cruz Mountains. And what I want to share with you is something that happened yesterday in this very place and how we kind of created a sacred space spontaneously where we felt, at that moment, some kind of wholeness and, deep connections with few strangers and also with nature.

Some of you might have heard about the wildfires in California that have been happening in recent weeks. It was very, very difficult time here. And this land was very affected. Seventy thousand people had to be evacuated from this area and, more than a thousand structures and homes were burned to ashes. People will have to stay outside their homes for a few weeks, which is bringing a lot of uncertainty, fear, loss and grief and so forth.

I moved here on Friday with twelve other folks from our community, and we were trying to clean up the land and secure things here, in the forest. Meanwhile, there was a team of contractors from PG&E walking around, trying to notify the trees that are 'qualified' to be cut off because they can easily fall down and were dangerous for the electricity lines.

So one man, Antonio, came and briefed me about what they were going to do, and their agenda here. I said, "Okay, no problem. Go ahead. But before you start chopping the trees, I want a few minutes to notify all the living beings around the ecosystem and that the trees would be cut off and that they can leave before this particular day and time. We don't want to create any difficulties and threats for them." Antonio said, "Okay, no problem, I will let you know once we decide which trees we want to remove."

While we were cleaning up the space, he came to us and said that he has found two trees, and he can show it to me. As I followed him I saw six other guys standing near the trees that had to be cut. He showed me saying, these are two trees that we have identified and we want to cut it down tomorrow as they are dangerous.

As the situation was very spontaneous I asked them, "Is it okay if I announce, for all living beings around here, what is going to happen?"

So I start to announce, and asked Antonio, at what time will the trees be cut down. He said, 10:00AM tomorrow. So I started notifying all living beings by saying, "I inform you that tomorrow, these two trees will be cut down. So you and your families please leave safely and find a safe space somewhere else. We're very grateful for all the hard work that you have done here. We appreciate the trees that have stayed here for generations, that sheltered many living beings, the ecosystem, and so forth."

And the team of sub contracts were listening to me with surprise. Then, I asked them if I can chant a mantra, which we usually do in this kind of situation. They said, go ahead. So I started chanting the Great Compassion Mantra and, you know, from the corner of my eyes, I saw one of the guys had put his palms together, in prayer position.

I also mentioned that at the end of the chant, we always share the goodness -- which has arisen from the chanting and our practice -- with all living beings here in the forest and with all the people who are affected by the fires, facing difficulties and suffering. I wish them wellbeing and that this land could be restored. So I asked again, could I do that, and they said okay, go ahead.

So I chanted the Transfer of Merit, and there was a moment of silence. Another guy told me later on, "I apologize. When you were chanting, I looked at my phone, but this was not to disrespect. I just wanted to keep your intimacy for you. But my heart was with you, brother."

I said, "Okay. [laughs] That's great. No problem. I felt that you and all of us here were together in this kind of spontaneous moment."

Antonio later asked me, "Can you please tell me, what did you chant?"

I told him that it was the Great Compassion Mantra.

He said, "You know, it was the best thing that I have heard in the last five months."

And he added, "You know, now I will be more caring and careful whenever I will cut the trees down."

I said, "Well, I deeply appreciate that."

So this was something that was, how to say, very interesting that happened between me and these strangers. It was somehow a very deep interaction and connection. And we created this kind of sacred space spontaneously with ourselves, the strangers, with the trees, the ecosystem, and all the living beings around the trees. And, as we know that each tree is a small universe and that the trees are connected to other trees, we were sharing the merits and virtues with these and also others.

In that moment we were kind of very deeply connected. We met as strangers and I left with the feeling as though I met my family members there. They also kind of felt that there was something unique that happened here. It was very unpredictable, you know. So this is my story from Redwood Vihara Forest.

Jordan Becomes First Country In The World To Vaccinate Refugees

Volunteers Remove Over 9,000 Pounds of Trash from Tennessee River